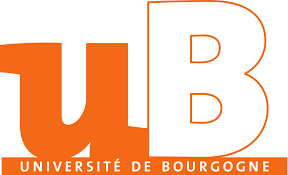 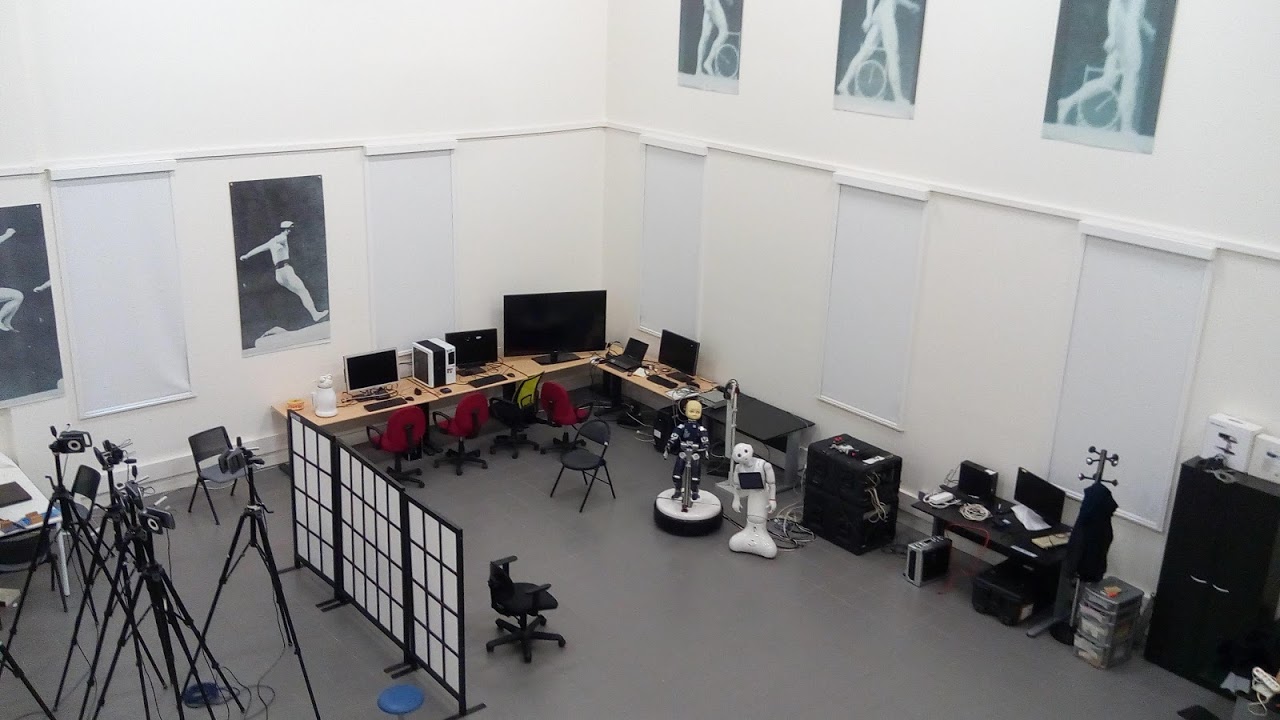 The RCL is a joint CNRS/INSERM endeavor whose objective is to understand human cognition, and to implement and demonstrate this understanding in humanoid robots. The RCL was initially created in 2003 while I was a CNRS researcher at the Institute des Sciences Cognitives, CNRS UPR 9075.

Today the RCL is proud to be a part of INSERM U1093 CAPS, in the prestigous Marey Building.

Researchers associated with the RCL: 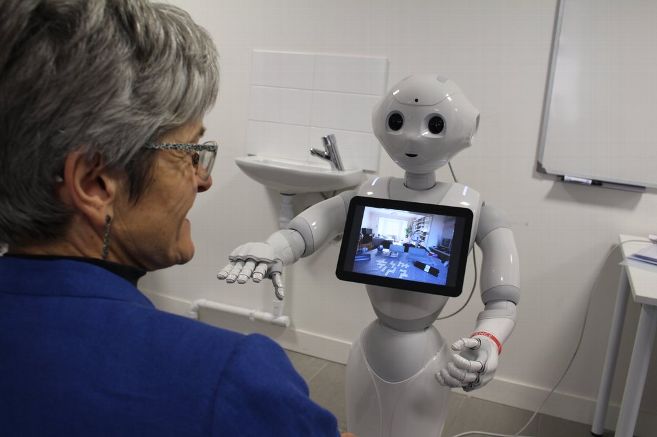 Robot Memory Assistant – The introduction of an Autobiographical Memory (from our work on EU Project What You Say is What you Did) makes a big difference:

In cooperation with the Bristol Robotics Laboratory (Chris Melhuish Director and Project FP7 Project Leader), CNRS LAAS Toulouse, The Max Plank Institute for Evolutionary Anthropology, the Italian Institute of Technology and our group, we investigate the developmental foundations of human cooperation, and implement these in humanoid robots for safe human robot cooperation. 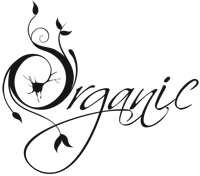 ORGANIC
Current speech recognition technology is based on mathematical-statistical models of language. Although these models have become extremely refined over the last decades, progress in automated speech recognition has become very slow. Human-level speech recognition seems unreachable. The ORGANIC project ventures on an altogether different route toward automated speech recognition: not starting from statistical models of language, but from models of biological neural information processing – from neurodynamical models. The overall approach is guided by the paradigm of Reservoir Computing, a biologically inspired perspective on how arbitrary computations can be learnt and performed in complex artificial neural networks.  We INSERM contibutes our significant background in recurrent neural network computation, indeed our founding work in this area.

Two important papers on reservoir computing came from this work:

In cooperation with CNRS LAAS Toulouse (Rachid Alami ANR Project leader), the GIPSA-LAB Grenoble, GREYC () and LAMIH ().  The objective of the AMORCES project is to study decisional and operational human-robot interaction, and more specifically, the impact of verbal and non-verbal communication on the execution of collaborative tasks between a robot and a human partner.

One of the long-term goals in the domain of human-robot interaction is that robots will approach these interactions equipped with some of the same fundamental cognitive capabilities that humans use.  This will include the ability to perceive and understand human action in terms of an ultimate goal, and more generally to represent shared intentional plans in which the goal directed actions of the robot and the human are interlaced into a shared representation of how to achieve a common goal in a cooperative manner.  Our approach to robot cognition makes a serious commitment to cognitive neuroscience and child development, as sources of knowledge about how cognition is and can be implemented.

One of the "canonical" scenarios that we use in human-robot cooperation is the table building scenario.  This requires cooperation, and manipulating the four legs, one after another, give's the robot a chance to learn during the course of the task.  We have  implemented successively sophisticated cooperation capabilities with the Lynx 6, and the HRP-2 and iCub Humanoids.

Work with the iCub
We have a significant collaboration with the Italian Institue of Technology , creators of the iCub

As part of the JRL, we were pioneers on spoken language programming of the HRP2:

Spoken Language programming of the HRP2 in a cooperative construction task

The paper accepted at the 2007 International Conference on Robotics and Automation ICRA is available below.

Here are some details of how it works Dominey PF (2007)

Here are some relatively cool videos from the pre-humanoid days....

This is a prophetic paper that has been out of print until recently!!

Dominey PF (2007)  Sharing Intentional Plans for Imitation and Cooperation:  Integrating Clues from Child Developments and Neurophysiology into Robotics,  Proceedings of the AISB 2007 Workshop on Imitation.

Dominey PF (2005a) From sensorimotor sequence to grammatical construction: Evidence from Simulation and Neurophysiology, Adaptive Behavior, 13, 4 : 347-362

Dominey PF  (2005b) Towards a Construction-Based Account of Shared Intentions in Social Cognition, Comment on Tomasello et al. Understanding and sharing intentions: The origins of cultural cognition, Behavioral and Brain Sciences, In press

The results of this research are exploited through the publication of research articles (see below), and also through the development of potential "real world" applications.  An exciting new venue for these real world applications is the  At Home league of  RoboCup.

RoboCupAtHome emphasises the aspects of robotics that will progressively allow robots to take their natural place at home, with people like me and you.  Recently we have collaborated with Alfredo Weitzenfeld in a French-Mexican project supported by the LAFMI that involved  Human Robot Interaction in the RoboCup At Home Competition in Bremen Germany, June 2006.  The details including some action packed video can be found at

For the 2007 competion in Atlanta, we introduced some more articulated Human-Robot Cooperation into the Open Competion, and qualified for the Finals. At the 2010 competition in Singapore we made it to phase 2, t he first team to use the Nao.

Examples of some Current Research

Over the past several  years we have made  technical progress in providing spoken language, motor control and vision capabilities to robotic systems.  This begins to provide the basis for progressively elaborate human-robot interaction.

Some of our current research takes specific experimental protocols from studies of cognitive development to define behavior milestones for a perceptual-motor robotic system.  Based on a set of previously established principals for defining the “innate” functions available to such a system, a cognitive architecture is developed that allows the robot to perform cooperative tasks at the level of an 18 month human child.  At the interface of cognitive development and robotics, the results are interesting in that they (1) provide concrete demonstration of how cognitive science can contribute to human-robot interaction fidelity, and (2) they demonstrate how robots can be used to experiment with theories on the implementation of cognition in the developing human. See Dominey 2007 below).

In addtion to looking at how relatively explicit communication can be used between humans and robots, we are also investigating how the robot can more autonomously discover the structure of its environment. This work is being carried out by Jean-David Boucher, a PhD student whoo is financed by the Rhone-Alpes Region, under the Presence Project of the Isle Cluster.  Some results from the first year can be seen in Boucher J-D,  Dominey PF (2006).

Background on Research Projects and Collaborations:

Over  the last four  years we have had several engineers from the Ecole Centrale de Lyon work over the summer, helping to do some of the technical nuts and bolts of system integration, including Nicolas Dermine (2003), Marc Jeambrun, Bin Gao, Manuel Alvarez (2004),  Julien Lestavel and Joseph Pairraud (2006).  The 2007 ECL Team was  made up of  Benoit Miniere, Oussama Abdoun and Frédéric Grandet.  The project involved development of a spoken langauge based posture and behavior editor for  our Lynx two-arm system, with autonomous sequence learning.  This included development of a webots simulator  (Grandet), vision-based inverse kinematics for object grasping (Abdoun) and the spoken language based editor for postures and behavioral sequences (Miniere).  The 2009 team  worked on the iCub Robot.